Evidian SafeKit provides a high availability cluster with real-time replication and failover in Cloud. This article explains how to implement quickly such a cluster in Cloud. A free trial is offered below with a quick start template for an easy deployment in the Cloud. 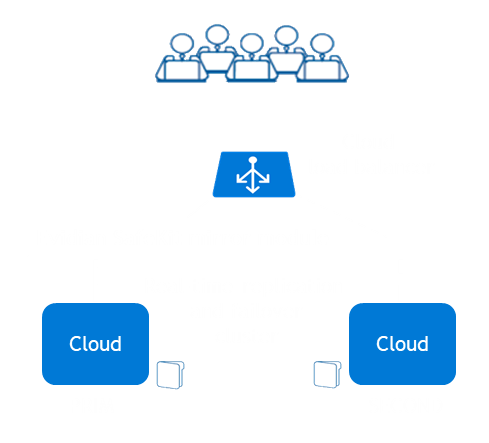 Note that SafeKit is a generic product. You can implement with the same product real-time replication and failover of new directories and services, databases, docker containers, full Hyper-V or KVM virtual machines, Cloud applications. See other examples of mirror modules here.

This clustering solution is recognized as the simplest to implement by our customers and partners. It is also a complete solution that solves

On the previous figure,

On the previous figure, the server 1/PRIM runs the critical application. Users are connected to the virtual IP address of the mirror cluster. SafeKit replicates files opened by the critical application in real time. Only changes in the files are replicated across the network, thus limiting traffic (byte-level file replication). Names of file directories containing critical data are simply configured in SafeKit. There are no pre-requisites on disk organization for the two servers. Directories to replicate may be located in the system disk. SafeKit implements synchronous replication with no data loss on failure contrary to asynchronous replication.

For other clouds, Go to the Manual Installation tab

Configuration of the Cloud load balancer

You must configure the Cloud load balancer with:

For more information, see the configuration of the Cloud load balancer.

Configuration of the Cloud network security

Do not configure a virtual IP address (next image) because this configuration is already made in the Cloud load balancer. This section is useful for on-premise configuration only.

This website uses cookies to improve your experience while you navigate through the website. Out of these cookies, the cookies that are categorized as necessary are stored on your browser as they are essential for the working of basic functionalities of the website. We also use third-party cookies that help us analyze and understand how you use this website. These cookies will be stored in your browser only with your consent. You also have the option to opt-out of these cookies. But opting out of some of these cookies may have an effect on your browsing experience.
Necessary Always Enabled
Necessary cookies are absolutely essential for the website to function properly. This category only includes cookies that ensures basic functionalities and security features of the website. These cookies do not store any personal information.
Non-necessary
Any cookies that may not be particularly necessary for the website to function and is used specifically to collect user personal data via analytics, ads, other embedded contents are termed as non-necessary cookies. It is mandatory to procure user consent prior to running these cookies on your website.
SAVE & ACCEPT