How to implement a Hyper-V cluster with replication automatic failover and load balancing of VMs and with the SafeKit software between two redundant servers without shared disk? 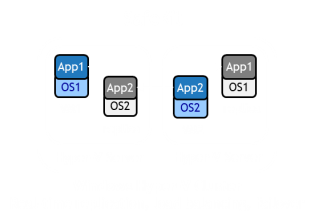 Evidian SafeKit brings high availability to Hyper-V between two redundant servers. This article explains how to implement quickly a Hyper-V cluster without shared disk and without specific skills. The high availabity module hyperv.safe and a free trial are offered in the Installation tab below.

Note that SafeKit is a generic product. You can implement with the same product real-time replication and failover of new directories and services, databases, docker containers, full Hyper-V or KVM virtual machines, Cloud applications. See other examples of mirror modules here.

This clustering solution is recognized as the simplest to implement by our customers and partners. This solution solves

For a complete solution with quick recovery time, consider high availability at the application level and read this article VM HA vs Application HA.

The solution requires no shared disk and no special Windows configuration. Only 2 Windows servers are necessary. The SafeKit software is installed on both of them.

Note that this solution is limited to replication and failover of 25 VMs.

Note also that SafeKit is able to automatically re-synchronize a failed Hyper-V server without any manual operation and without stopping the VMs. It is an important differentiator when comparing SafeKit to replication solutions whose failover only works once: reintegrating the failed server in the cluster requires complex and non-automated manual operations.

Go to the Installation tab

Go to the Configuration tab (above)

If it is not the case, before the SafeKit configuration, you have to make a configuration in Hyper-V manager (see demonstration):

Important: all the SafeKit configuration is made from a single browser.

In the previous image, the save operation put the IP addresses in the file c:\safekit\var\cluster\cluster.xml and apply the distributed command c:\safekit\safekit –H "*" -G which configures node 1 and node 2. So do not redo this operation on the other node. Check the connectivity and firewall between both nodes for troubleshooting.

In the Configuration tab, click on hyperv.safe (xxx.safe in the next image) then enter VM1 as the module name and Confirm (the console finds hyperv.safe in the demo/ directory that you previously filled)

In the SafeKit configuration (next image), put:

The NORMAL_STOP and FORCE_STOP values may be "save","stop" or "off". When there is a scheduled stop of the primary with a failover on the secondary:

Check the success green message on both servers and click on Next (previous image).

We assume that node 1 is the referencial with the up-to-date data (otherwise do the following operation on node 2).
Select node 1 and click on start it (next image).
When you will start node 2, the first resynchronization will be made from node1 to node 2.
If in doubt, before this operation, we suggest you to make a copy of replicated directories before starting the cluster to avoid any errors.

node 1 must reach the ALONE (green) state (next image) meaning that the start_prim script has been executed on node 1.
When node 1 reaches the ALONE (green) state, you can check that the Hyper-V application is started on node 1.
If the state is ALONE (green) and if the application is not started, check the start_prim script: you can find output messages of the script in the Application Log available in the Control tab.
If node 1 does not reach the ALONE (green) state, analyze why with the Module Log available in the Control tab.
Note: in the next image, if the cluster is in the state [WAIT (red) not uptodate - STOP (red) not uptodate], stop the WAIT server and force its start as primary (click here to see the operation).

We assume that the services started automatically by SafeKit in the start_prim script are stopped on node 2.
Start node 2 (previous image) which becomes SECOND green (next image) after resynchronisation of all replicated directories (binary copy from node 1 to node 2).

The replication and failover is operational for VM1. VM1 is running on the PRIM node (previous image). Only modifications inside the Hyper-V files defining VM1 are replicated in real-time in this state.

Check with Hyper-V manager that VM1 is started on the primary server and stopped on the secondary server.

Stop the PRIM node by scrolling down the menu of the primary node and by clicking on Stop.

Check that there is a failover on the SECOND node and check the restart of VM1 with Hyper-V manager. As the failover script imports the virtual machine on the secondary Hyper-V, the failover can fail because of Hyper-V settings and processor compatibility (see this article).

Configure boot start (next image on the right side) configures the automatic boot of the module when the server boots. Do this configuration on node1 and node2 once the high availability solution is correctly running.

In Hyper-V manager, configure the replicated VM with Automatic start action: none. SafeKit controls the start and the stop of the VM on one node or the other. 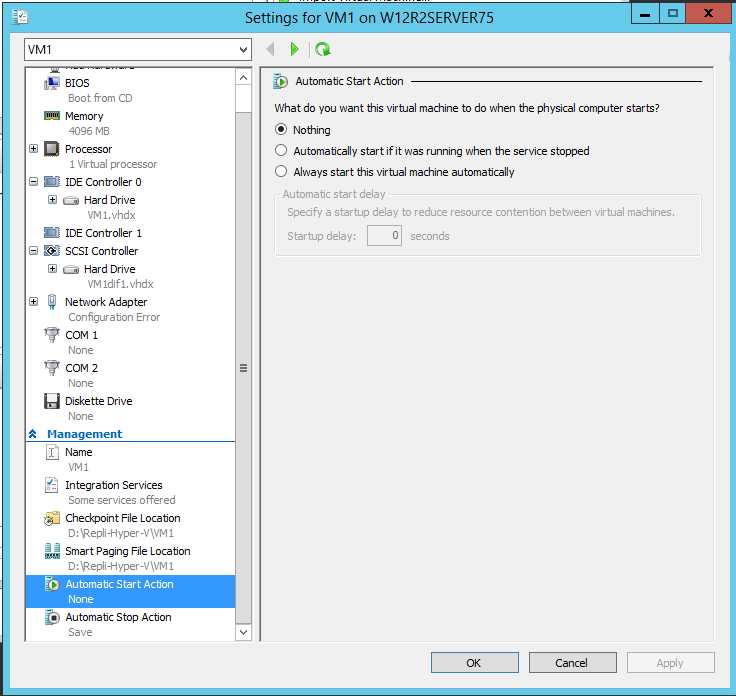 Note that for synchronizing SafeKit at boot and at shutdown, on both nodes, we assume that a command line has been run during installation as administrator: .\addStartupShutdown.cmd in C:\safekit\private\bin (otherwise dot it now only once).

Note that the Hyper-V/SafeKit and KVM/SafeKit solutions are limited to replication and failover of 25 VMs.