Evidian SafeKit brings high availability to Milestone XProtect, the CCTV video surveillance system. This article explains how to implement quickly a Milestone cluster with the management services, the event services and the Microsoft SQL Server database without shared disk and without the complexity of Microsoft cluster. The milestone.safe high availability module and a free trial are offered in the Installation tab below.

In the Milestone system architecture, SafeKit clusters can be installed for high availability of:

All the services (SQL+Event+Management) can be installed on a single cluster and we consider this use case in this article. The configuration can also be easily split on several clusters.

Note that high availability of recording servers are managed by the Milestone built-in solution and not by SafeKit.

Demonstration of a Milestone XProtect cluster with Evidian SafeKit

Go to the installation tab

Go to the configuration tab

Launch the web console in a browser on one node by connecting to http://localhost:9010 (next image)

In the previous image, the save operation put the IP addresses in the file c:\safekit\cluster\cluster.xml and apply the distributed command c:\safekit\safekit –H "*" -G which configures node 1 and node 2. So do not redo this operation on the other node. Check the connectivity and firewall between both nodes for troubleshooting.

In the Configuration tab, click on milestone.safe (xxx.safe in the next image) then enter milestone as the module name and Confirm (the console finds milestone.safe in the "demo/" directory that you previously filled in the Installation tab)

After the click on Validate, this new window appears (next image)

On the previous image:

Check the success green message on both servers and click on Next (previous image).

In the next image, for Milestone 2019 R2 and above, do not start anything and click on the Close button.

Special procedure on node 1 for Milestone 2019 R2 and above

You have to run a special script (UpdateAuthServerUri.ps1) to set the virtual IP address in 2 local Milestone files. This script modifies the following files:

Note that the same procedure is required when Milestone is running with Microsoft Cluster: https://developer.milestonesys.com/s/article/RS-goes-offline-mode-after-switching-the-Management-Server-cluster-node.

For all versions of Milestone

We assume that node 1 is the referencial with the up-to-date SQL database (otherwise do the following operation on node 2).
We assume that the services started automatically by SafeKit in the start_prim script are stopped on node 1.
Start the milestone module on node 1 by forcing its start as primary (Expert/Force start/as prim in the next image).
When the module reaches the ALONE green state, check that Milestone is running normally on node 1. 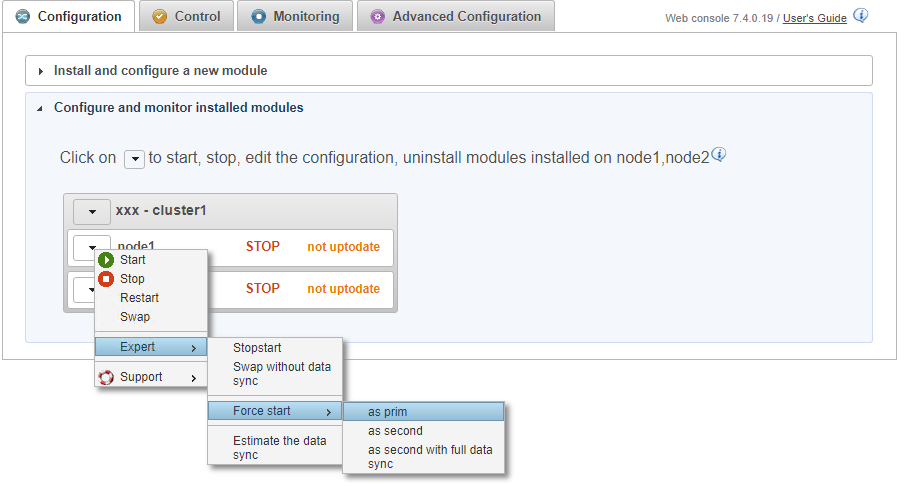 Special procedure on node 2 for Milestone 2019 R2 and above

The procedure now registers the management server on node 2 in the SQL database running on node 1 through a connection to the virtual address. We suppose at this step that the SafeKit milestone module has been started on node 1 (SQL database available at the virtual IP address).

For all versions of Milestone

We assume that the services started automatically by SafeKit in the start_prim script are stopped on node 2.
Start node 2 (previous image) which becomes SECOND green (next image) after resynchronisation of all replicated directories (binary copy from node 1 to node 2).

The cluster is operational with Milestone XProtect and SQL services running on the PRIM node and nothing running on the SECOND node (previous image). Only modifications inside files are replicated in real-time in this state.

To have the Milestone Management Client application reconnected transparently after failover, you need to connect it through the virtual IP address and to use Basic authentication credentials in a workgroup environment. Windows Local Account credentials are only valid on one server.

Stop the PRIM node by scrolling down the menu of the primary node and by clicking on Stop. Check that there is a failover on the SECOND node. And with Windows Microsoft Management Console (MMC), check the failover of Milestone XProtect and SQL services (stopped and started in the stop_prim and start_prim scripts).

Note that for synchronizing SafeKit at boot and at shutdown, on both nodes, we assume that a command line has been run during installation as administrator: .\addStartupShutdown.cmd in C:\safekit\private\bin (otherwise dot it now).

This video shows the configuration of a Milestone XProtect mirror module with synchronous real-time replication and failover.

After a failover, reconnection of a Recording Server and a Milestone Management Client is also demonstrated.